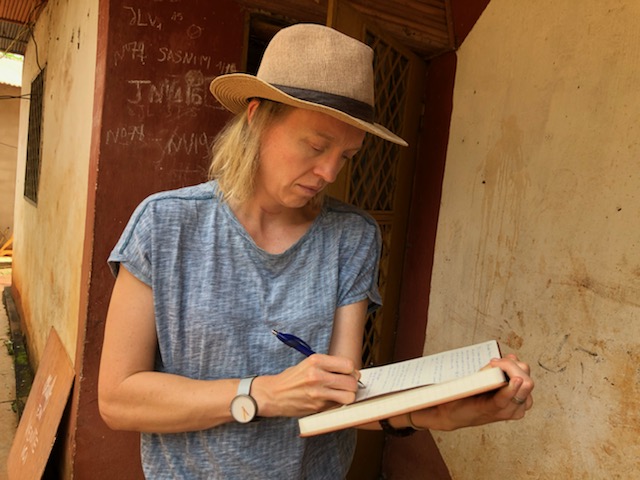 As Director of Research in The Task Force for Global Health’s Neglected Tropical Diseases Support Center (NTD-SC), Katie Gass is constantly working the numbers. At any one time, she juggles a formidable portfolio of 200 operational research projects in dozens of countries, crunching a huge data set in support of local efforts to wipe out diseases like lymphatic filariasis (LF) and trachoma.

Gass has long been a number cruncher, harkening back to her days as an undergrad math major at Oberlin College. It was her co-major, acting, that she’d meant to pursue, but an internship on Broadway quickly dissuaded her from those plans. “I was hanging out with the stars while doing theater classes,” she says. “After hearing their trials and tribulations, I realized I didn’t love it that much.”

A brief interlude organizing community health volunteers with the Peace Corps in the deserts of Peru led her into global public health. Entering epidemiology, in a sense, returned Gass to her roots. “The irony is, my parents are in public health. Epidemiology is the perfect match for me. I truly love the field.”

During an early stint with the now defunct A2Z Micronutrient Project at the Academy for Educational Development, her team had to solve problems such as how to get fortified flour into malnourished communities. It quickly became apparent to Gass that to make an impact in her profession, she’d have to earn a higher degree. “I needed a PhD if I was going to have a seat at the table where the decisions are made,” she says.

A work-study program at Emory introduced Gass to The Task Force for Global Health’s Lymphatic Filariasis Support Center and its then-director, Eric Ottesen, MD. “He had a huge data set that he needed someone to analyze,” she recalls. “He entrusted me to do the analysis and present the findings, and in the process, I got to work with all these top-notch researchers. It really catapulted my career.” She stayed on part-time for seven years while earning her advanced degrees.

Armed with both her PhD and a master’s degree in public health, Gass formally joined The Task Force in 2014 as an epidemiologist with the NTD-SC. Now the NTD-SC’s Director of Research, Gass oversees a team of technical experts who work closely with international researchers to seek answers to some of the global health community’s most pressing questions related to the elimination of neglected tropical diseases:

When pharmaceutical companies like Pfizer, Merck, and GSK generously donate drugs to combat these diseases, what is the best way to measure the number of people actually receiving these drugs and identify those who were missed?

What is the best diagnostic test for the sight-stealing parasitic disease, onchocerciasis (river blindness)?

How can ministries of health conduct surveillance to determine whether they have successfully eliminated lymphatic filariasis (also known as elephantiasis), a disabling and disfiguring mosquito-borne disease that threatens 886 million people in 52 countries (WHO)?

“My job as an epidemiologist is to design different ways of sampling populations, depending on the disease and the question we want to answer,” Gass says. “More broadly, I want to make sure that the NTD-SC is supporting sound science that addresses key questions the World Health Organization (WHO) needs to answer to help global programs achieve their NTD elimination goals.”

To reach that end result involves a feat of coordination with a coalition of researchers spread across the globe. The NTD-SC has supported research teams in over 50 countries, and sometimes involves traveling to remote villages and going door-to-door to survey residents. Gass’s team works with international experts and investigators from endemic countries to develop the research protocols, and provides funding for the research, thanks to grants supplied by the Bill & Melinda Gates Foundation (BMGF), the United States Agency for International Development (USAID), and UK aid from the British government.

Managing up to 200 projects simultaneously – 40 to 50 of them active at any one time – requires top-notch teamwork and organizational skills. “I have six different lists sitting on my desk. I may have three ‘to-do’ notepads going in one day,” she says. “Our team has developed good project management practices that allow us to keep track of each study, but it’s a constant game of prioritization.”

It’s also a game of catch-up. As the science evolves, Gass’s team has to keep up with diagnostic and technological advances, and find ways to bring these new tools to areas of the world that are often left far behind. “As national programs get closer to reaching disease elimination, finding those last cases of infection is like looking for a needle in a haystack. We need the help of new diagnostic tools, geospatial modeling, and mobile technology to achieve success,” she says.

Time is another adversary. “We have a pretty clear vision of what is needed to eliminate these diseases, but bringing people together around the remaining challenges and testing new solutions takes time, which is in high demand.”

Despite these impediments, the NTD-SC has been incredibly successful at building a strong international coalition of researchers, forging close relationships with local ministries of health, and answering critical global health questions. The answers it provides help the WHO develop new policies to strengthen public health programs in developing nations. “It’s very fulfilling,” Gass says of her job. “It’s nice to see your work lead to measurable change and improvements in people’s lives.”